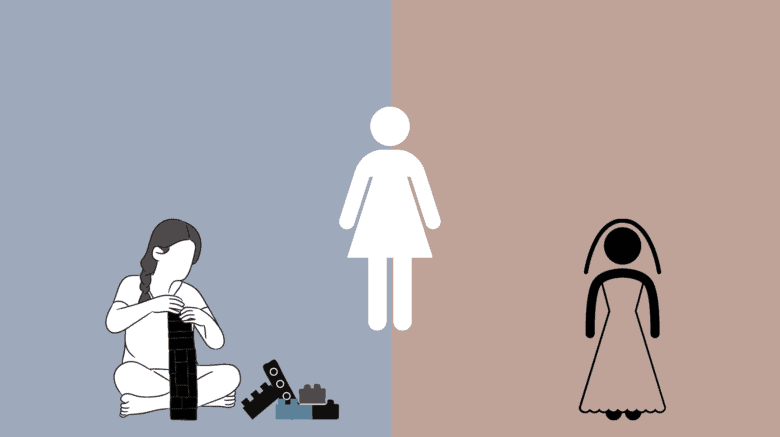 If you even think about child marriage, perhaps you think this kind of child abuse only happens in developing countries. Perhaps you think that here in the United States we would never allow such a travesty to befall our children.

Well, you are wrong – and the statistics are shocking. From 2000-2010 nearly 250,000 minors were married—mostly girls, married to much older men. Twelve of our states do not even track child marriage. Ten of our states have no minimum age for marriage.

At the age of 13, I was forced to marry my care provider. He was a 32-year-old man whose “care” involved rape that resulted in pregnancy. Marriage to this man was forced on me, while there is a Federal Statutory Rape Law, a legal union exempts the rapist from punishment. So, my rapist received a ticket out of prison while I received a life sentence.

By the time I was 15, I had two children. Statistics show that married teens are 40 percent more likely to give birth to a second baby within 24 months of the first baby. These child marriages have devastating consequences: 80 percent of married teens end up divorced and living in poverty because without support or the opportunity to finish school, they cannot get a job.

Since the young mother’s parents are often the perpetrators, as in my case, I was left to survive on my own at 16 years old when I escaped the marriage with two toddlers. I was turned away from shelters because I was a minor and threatened with being sent back to my rapist or parents by law enforcement. I was not of legal age to sign a rental agreement or hire a lawyer. Sadly enough, suicide is sometimes the only way out for these young girls.

The U.S. Department of State calls child marriage a human rights abuse issue and The American Medical Association says child marriage puts children in danger of sexual trauma, mental trauma, human trafficking, and sexually transmitted diseases. According to the World Health Organization, the leading cause of death for girls aged 15-19 is complications of pregnancy and childbirth.

I floundered my way through my young adult life. Living below the poverty line. Sometimes without the basic essentials of electricity or even toilet paper. Most painful was not the fact that we went without but the fear I felt every day that my children would be taken away if anyone knew how we were living.

In the United States today, Unchained At Last is the leading non-profit focused on spearheading this issue. With the testimony of child marriage survivors like myself, legislation has been passed to end child marriage in Delaware and New Jersey (2018) – each with a bright-line bill of 18 years old, no exceptions.

As an adult, I have become an activist. I am a founding member of the organization “National Coalition to End Child Marriage in the United States” which is working at the federal level to address issues such as the statutory rape law.

I am currently working with Global Hope 365 with a primary focus on ending child marriage in California. We have successfully established resolutions in five California counties.

The Global pandemic has not interrupted this fight. By using our voices and telling our stories we have successfully closed the loopholes that allowed child marriage in two more states, Pennsylvania and Minnesota – also with the 18-year-old, no exceptions bill.

In 2018 when I began my investigations into child marriage, I was empowered by the knowledge that my case was not an isolated one. Growing up, I had convinced myself that it was. Learning that this type of abuse is affecting young girls in all 50 states inspired me to use my voice to speak out for those who cannot.

When I was silenced at age 13 about the truth of my situation, I was forced to marry in the best interest of the adults. The rapist escaped criminal charges and my parents avoided child neglect and endangerment charges. I only came to understand much later that children in my situation become peacekeepers who learn that they must not speak out against the abuse or manipulation by the very adults who have been entrusted with their care.

Now we know that it takes nearly three decades for child marriage survivors to overcome the shame they feel over this betrayal and finally speak up. Life before that is a struggle just to survive. And the economic impact trickles down from generation to generation. Those who marry before age 19 are 50 percent more likely to drop out of high school and four times less likely to complete college. The pandemic has only added to these staggering numbers. Child marriage is on the rise globally.

Child marriage is on the rise globally.

Ending child marriage is part of the Sustainable Goal Act of 2030. I believe this can be done, but only through educating our communities. It is astounding to discover that many legislators have no idea child marriage is legal in their state. How could they not know that we are not proactively protecting the rights of children? If we are to evolve as a nation, our outdated and archaic laws must be rewritten. If this is to be a country of equal opportunity, then child marriage must stop robbing children of actualizing their full potential.